The Music Table consists of a variation of desktop applications that disseminate several aspects of algorithmic electronic composition. For instance, there are programs like the Lindenmayer Explorer or the Pattern Machine that generate sounds and rhythms by applying a Lindenmayer algorithm respectively different kinds of patterns to sound notes. There are works like MusiCode with which users can create their own sound structures by playing with code fragments, or there are works like Rhythm of Shapes that disseminate contemporary methods of graphic notation in an interactive way.

It is a learning tool for users of all kinds of ages and education background.

Interesting sound patterns can also be developed through Lindenmayer systems. Visitors can define the patterns themselves and experience what sequences of tones are created when they are applied.

Patterns are units of information, which are repeated. Patterns can be used visually, as language or words, and as music. They are a principle that has been utilized in almost all style epochs. Many preludes by Johann Sebastian Bach, the accompaniment known as Alberti bass in classical music, or the arabesques in the music of Debussy or Ravel exhibit the rhythmic or melodic use of patterns. The pattern aesthetic became well known through the composers of minimal music, which is constructed exclusively of patterns, especially through Steve Reich. The installation Pattern Machine, which was developed in the ZKM | Institute for Music and Acoustics, is an interactive tool for designing musical patterns. Pattern Machine formalizes strategies of composition and perception as pattern formation, derivation, and progressive form, and renders them experienceable for visitors.

Programming codes are made up of a series of instructions, which the computer processes in sequential order. These instructions can be used to generate tones, sound designs, and even entire works of music. This code also generates upward and downward movements or a random selection of tones.

Now the numbers can be changed or the + can be replaced by a –, changing the upward musical scale into a downward arpeggio.

Visitors to the MusiCode installation can play with different code fragments, changing them to create their own sound structures. Become a composer of computer music!

In 1977, Iannis Xenakis (1922-2001), a Greek composer and architect, developed the UPIC (Unité Polyagogique Informatique CEMAMu) system. The system generates electronic sound according to graphical scores, drawn on the dedicated tablet. Similar to the UPIC system, this installation Rhythm of Shapes sonificates images but it employs photos as graphical scores instead of hand-drawn sketches. Every five minutes the installation automatically takes a photo and extracts the contours or the shapes in the photo. Then, the system interprets these shapes as a musical notation and generates polyphonic and dynamic rhythm patterns, employing multiple geometric cursors of different size and speed. 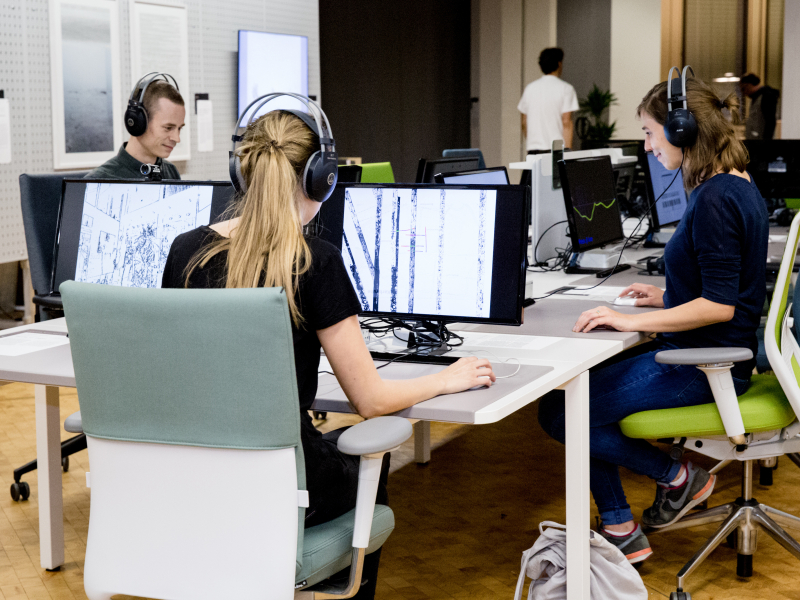